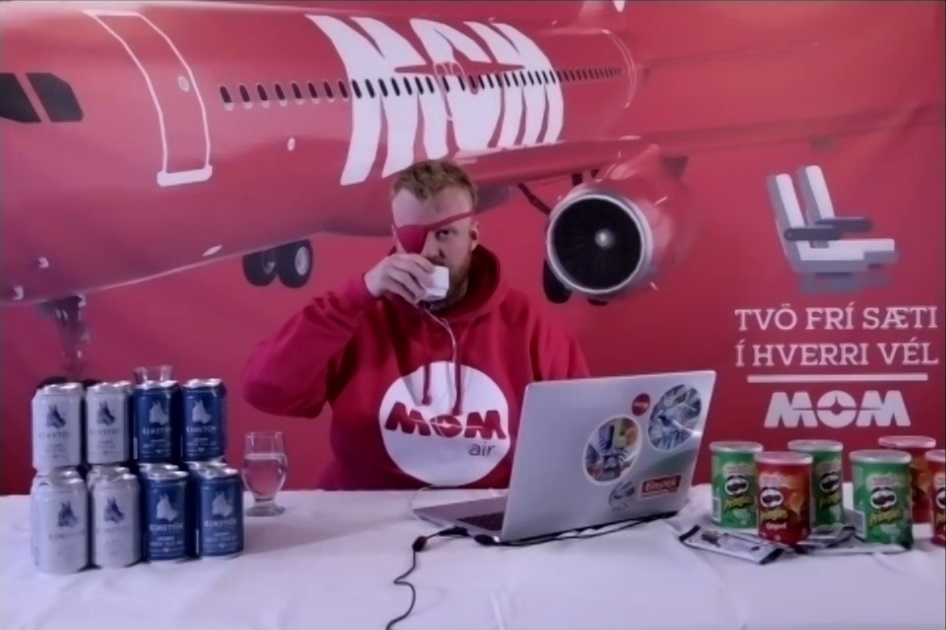 MOM air: “We are here to make a revolution”

The author of the most questionable project of a new airline in Iceland Oddur Eysteinn Friðriksson went public online to tell about MOM air’s policies, AOC, COVID flights and more. He insists that his project is not a joke, however, his answers rise more questions.

MOM air is forth attempt to launch a new low-cost airline in Iceland after WOW air collapse on spring 2019. The only revealed person behind the project is its CEO Oddur Eysteinn Friðriksson, famous in Iceland artist. He registered himself on LinkedIn as MOM’s air owner in February 2020 and nine months later first went public to tell more about his project.

Update 20.November 2020: As it was suspected earlier, MOM air is not a real business, but a project for BA in Fine Arts.

To shake the basics

From the very beginning Oddur claims that his airline will question existing aviation regulations.One of them is life vests on board of aircraft. According to him, these means have only “psychological function” to calm passengers and there are no proves that these vests actually can save someone’s life. As his best argument, Oddur says that during the “miracle on Hudson” (emergency landing of US Airways A320 on Hudson river in New York) only 4 from about 150 passengers used life vests correctly and nobody died. “That is why our lawyers are going to dispute that we should have life vests on board”, said Oddur during the press-conference. Instead he is going to sell life vests with MOM air logo to anyone interested. According to him, the vests will be multiply usable, and passengers will be able to use beyond the flights, “on the beach or somewhere else”.

Another “revolutionary” feature is special COVID flights, full of passengers, who already had had or still infected with a coronary virus, served with the crew, who immune to COVID. Oddur struggled here to answer Flugblogg’s question about how this feature correlates with the existing regulations, which prohibit COVID-infected people to travel anywhere and what is the point to deliver COVID-infected people to Iceland.

“Our initial thoughts were that there are so many COVID-infected people and those, who have had COVID and recovered from it, and these people want to travel. These people have certificates that they contracted COVID and being cured of it. This is just what we are looking at through these COVID times and offer these sorts of flights. Obviously, there are a lot of questions that are not answered in that. With the launch of the airline, we got some great news about a possible cure, so we hope that these COVID or non-COVID flights will not come to existence,” said Oddur Friðriksson.

For non-COVID flight, Oddur referred to the initiative of United airlines, which is going to perform express tests for all passengers before the flights.

Overbooking will be every time practice for MOM air’s passengers, said Oddur. Passengers will get notifications about available seats on short notice, preferably when they are already in the airport with their luggage. According to MOM air’s CEO, this feature will allow the airline to use the capacity of the planes in the best way, even it sounds uncomfortable for passengers. “Young people and students are interested in it”, Oddur is sure. He admits it sounds a bit wild nowadays, but refers to a new approach in taxi services: “Like Uber, who would think that you pay a stranger to pick you up, but it’s a reality”. The idea will work the same good with trans-Atlantic flights, Oddur thinks.

Oddur Friðriksson denies any similarities with previously existing WOW air, all assets of which were bought by American ideologist of WOW air resurrection Michelle Roosevelt Edwards Ballarin. Her lawyer earlier told media that the use of any WOW air-like assets by Oddur Friðriksson were not approved. MOM air’s CEO revealed that he was approached by Michelle Roosevelt Edwards Ballarin representatives with an offer to help to launch WOW air in Iceland, but he refused.

“I am really good to launch my own airline and I don’t need your help”, said Oddur Friðriksson looking directly to the camera during the press conference, “I think it is a big waste of money to buy WOW air logo and other assets. People talk about similarities with WOW air, but I think it is obvious that they are different”.

MOM air and others

Despite all bright announcements, MOM air yet did not get an air operator’s certificate (AOC), which is required to perform scheduled flights. Main team efforts are now put to finalize all necessary document for AOC application. “We have 6500 pages ready now. Before we get this, we can fly under a large European company”, said Oddur Friðriksson. However, he denied revealing the name of his partner airline, due to “secret agreement”.

The same fog of mystery covers the investors of MOM air. According to airline’s CEO, there is a mix of Icelandic and foreign investors, who together secured $40 mln, which is expected to be doubled or tripled before the end of 2020.

After obtaining own AOC, MOM air is going to lease six Airbus A320 neo from “Titan aero”, Oddur said. However, on Titan aero website, there are only Airbus A320-200 are available for leasing.

MOM air’s CEO confirmed that the first planned destinations from Keflavik are London, Paris, Berlin, Rome, Copenhagen, Oslo, Stockholm, Dublin and Glasgow in Europe, as well as New York, Washington, Boston, Toronto in North America. Interesting, that in London the airline is going to fly to Heathrow, where it is difficult to get time slots even for major credible airlines. Oddur, however, is sure that COVID cleared the way for MOM air to the main British airport.

RNSA: Low amount of fuel caused the plane crash at Múlakot in 2019

Official statement: MOM air is a project for BA in Fine arts