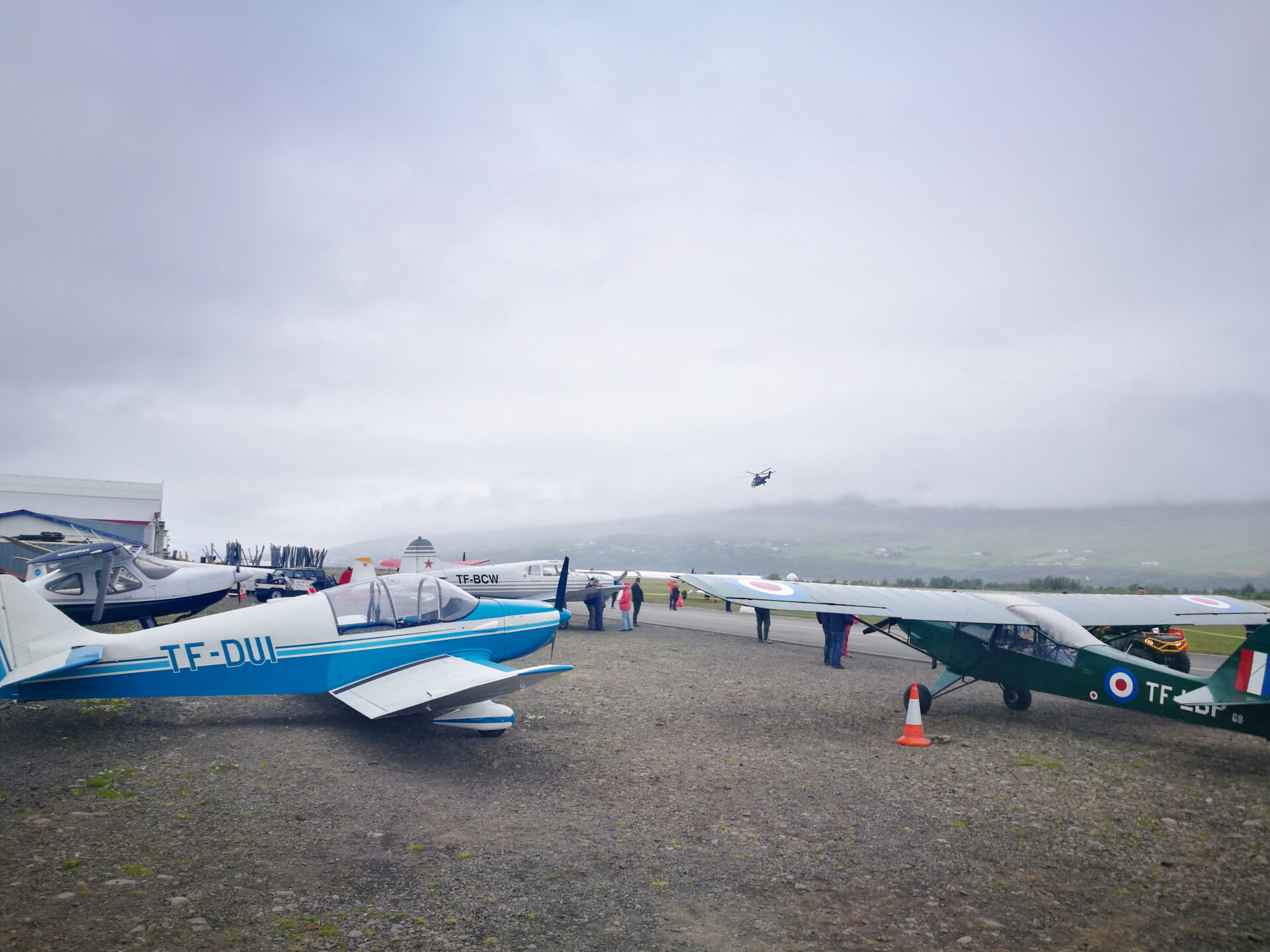 What was at the first post-COVID air show in Iceland. And the biggest in the world so far

Early sunny morning Air Iceland Connect Bombardier Dash 8 Q200 TF-FXK took off from runway 01 of Reykjavik airport and started to climb FL210 towards Akureyri. “I hope this kind of weather will be for the whole day”, I described expectations to my neighbour on the left seat. He was going to sail from Akureyri to Grimsey and is a frequent flyer on the route between two capitals. “No, it is going to be cloudy and raining”, he proclaimed, ruining all my dreams, “It was great weather yesterday and will be good on Sunday, but not today”. I doubt, denying accepting inevitable. Remember to trust sailors because he was right.

We met first clouds soon after passing Hofsjökull. According to METAR, the ceiling in Akureyri airport was just at 900 feet and it did not become better during the day. Despite this, it was difficult to find a parking spot near the Icelandic aviation museum and the queue at the entrance started outside. Probably not so much is happening in Akureyri to miss such an opportunity for fun. In the museum guests at first went through the museum hangar, where they could see Fokker 27 and Aérospatiale AS.365 Dauphin – the former aircraft of Icelandic coast guard Landhelgigæslan, near them there was a cockpit which cut from real Boeing 727, one of the first jets for Icelandic airlines company. Outside there was placed Douglas DC-3 TF-NPK – the most famous participant of all Icelandic air shows, which was not airworthy at this time. More than a dozen planes had been placed on the static exposition outside.

Inside Icelandic Aviation museum during the air show // Source: Flugblogg

The flying schedule included eleven parts: from the main flying horse of Icelandic aviation back in the 1930s – Waco YKS-7 TF-ÖRN to the most recent jet fighters F-35 of Italian Air Force, who currently perform air policing mission in Iceland, and formation aerobatic flights on Pitts S-2B. 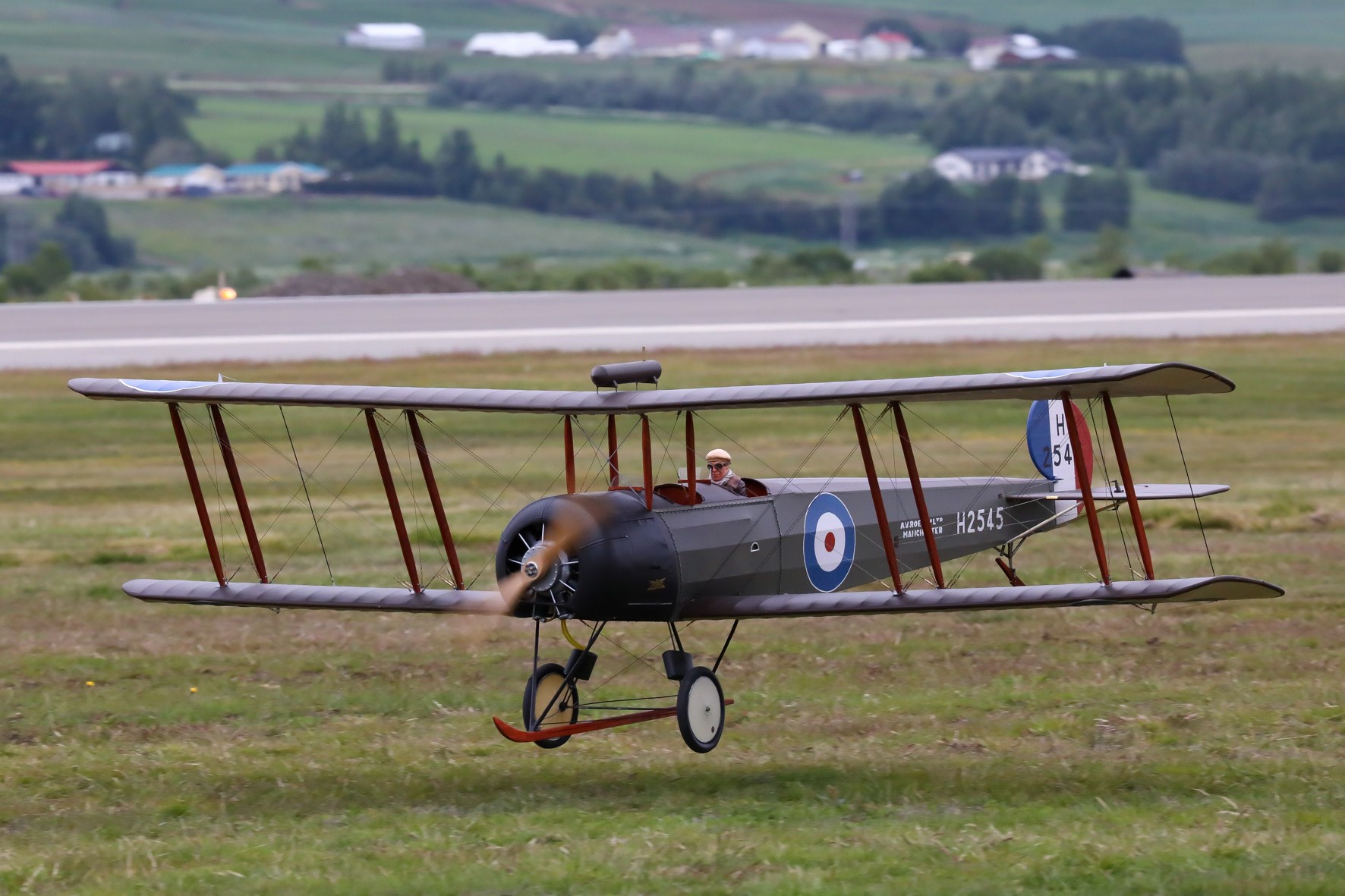 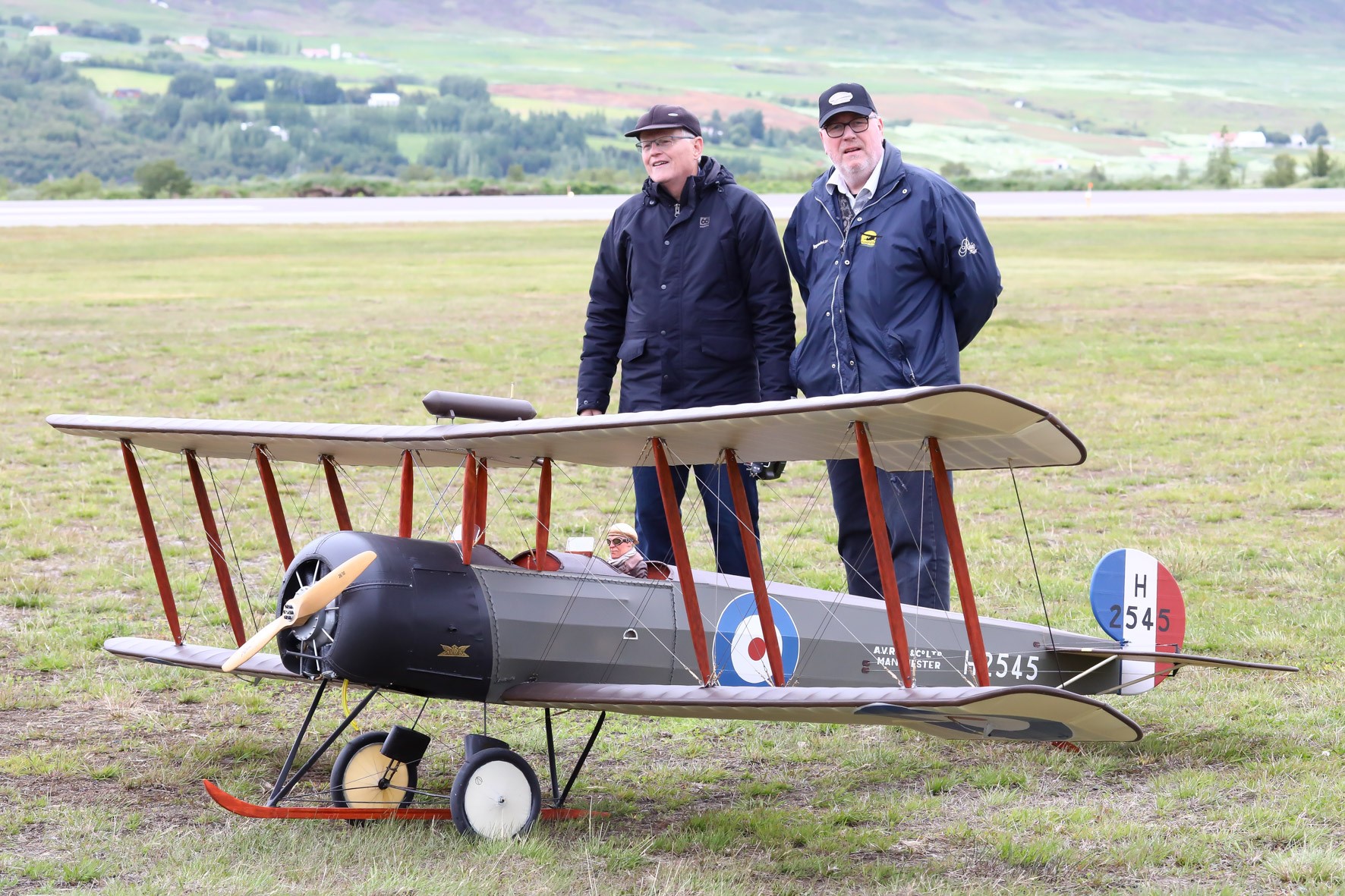 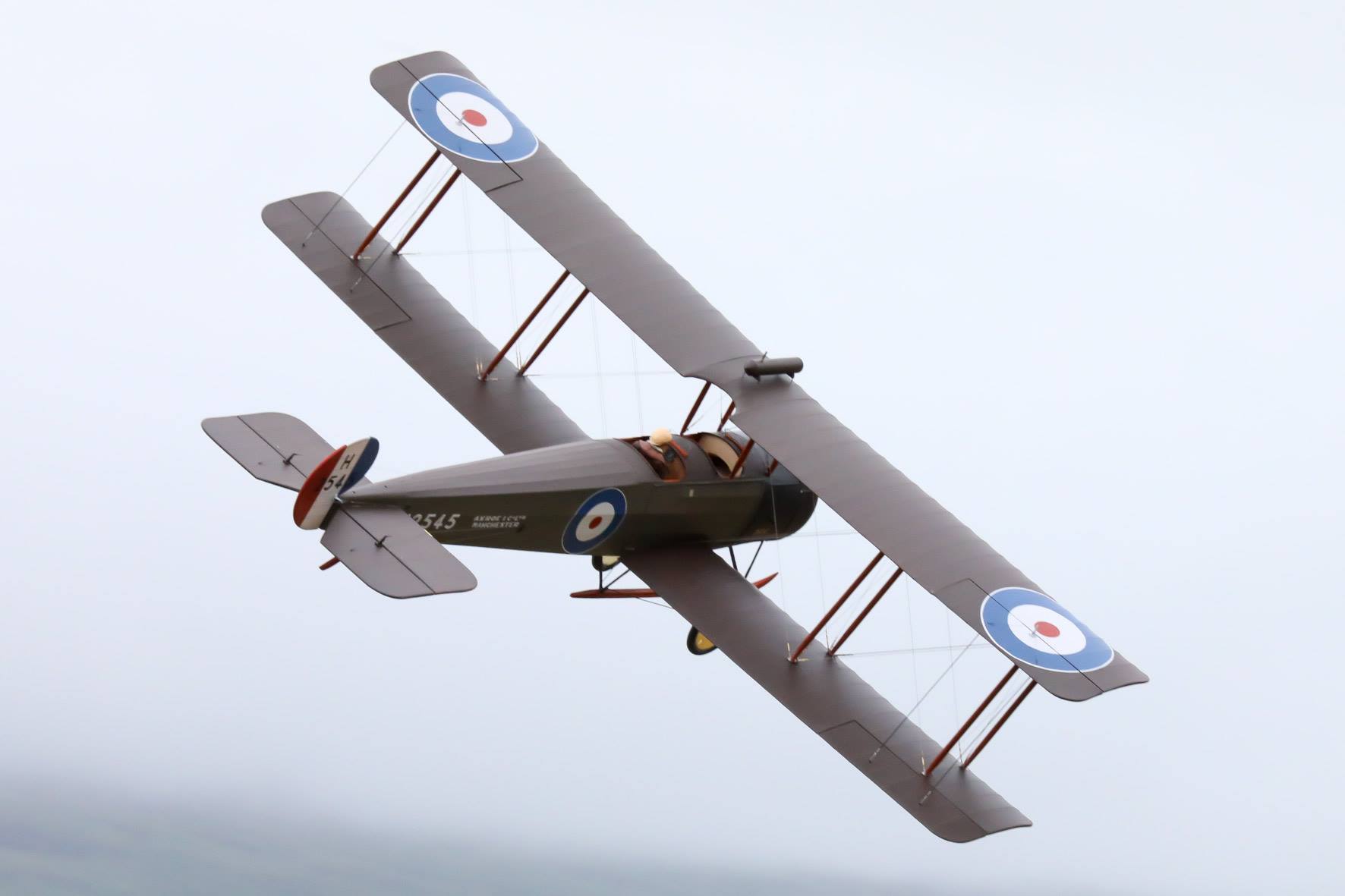 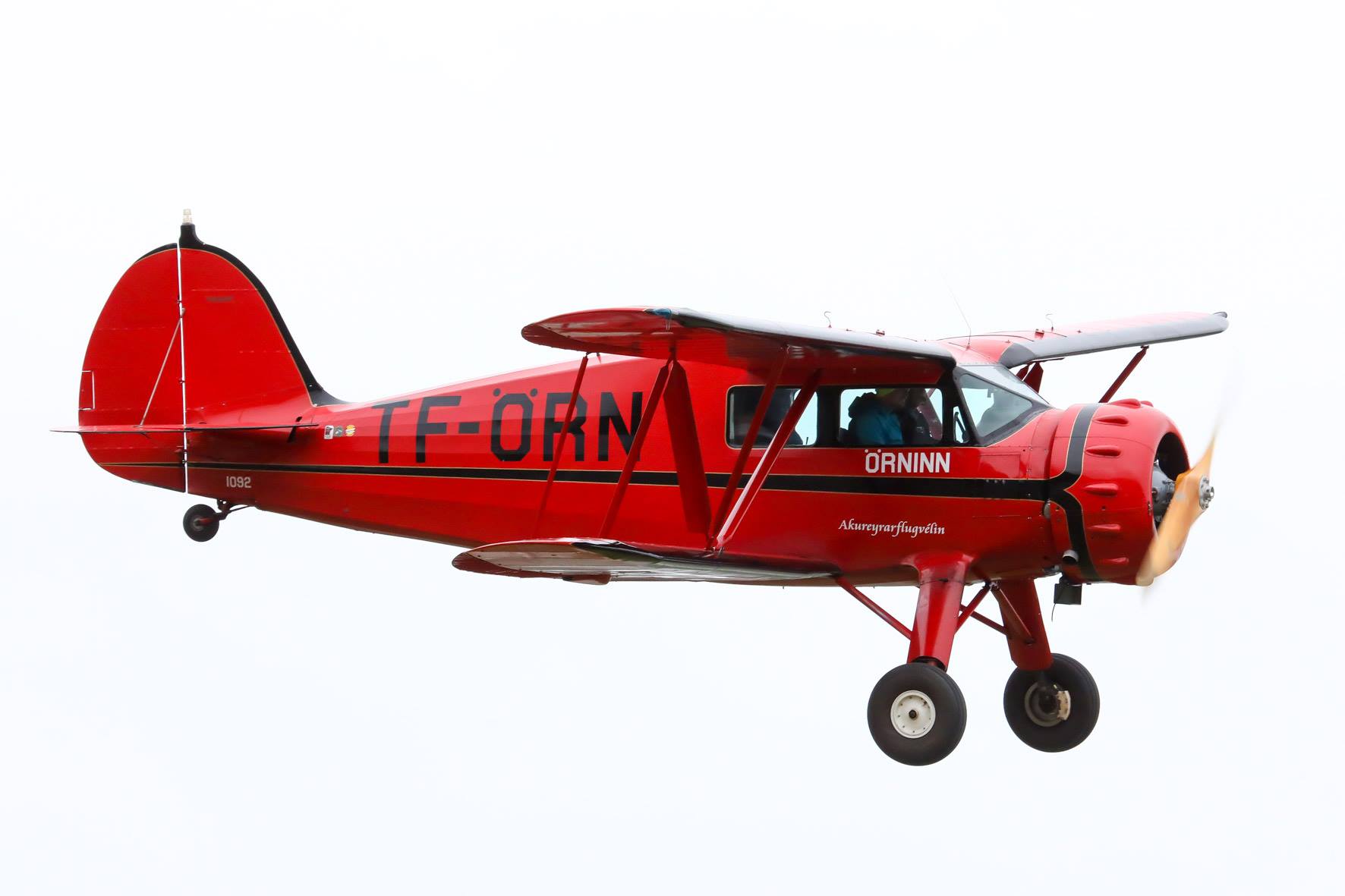 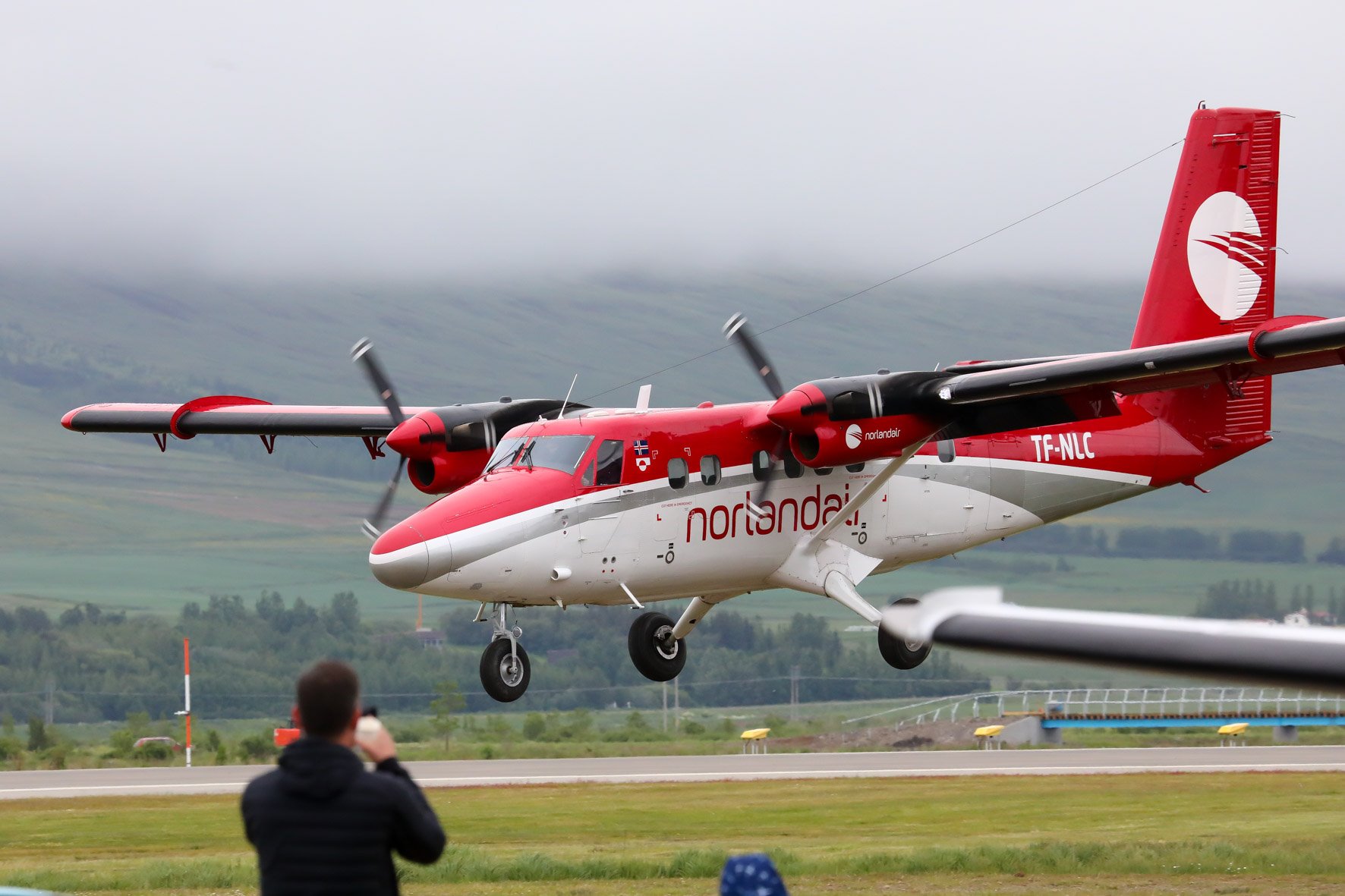 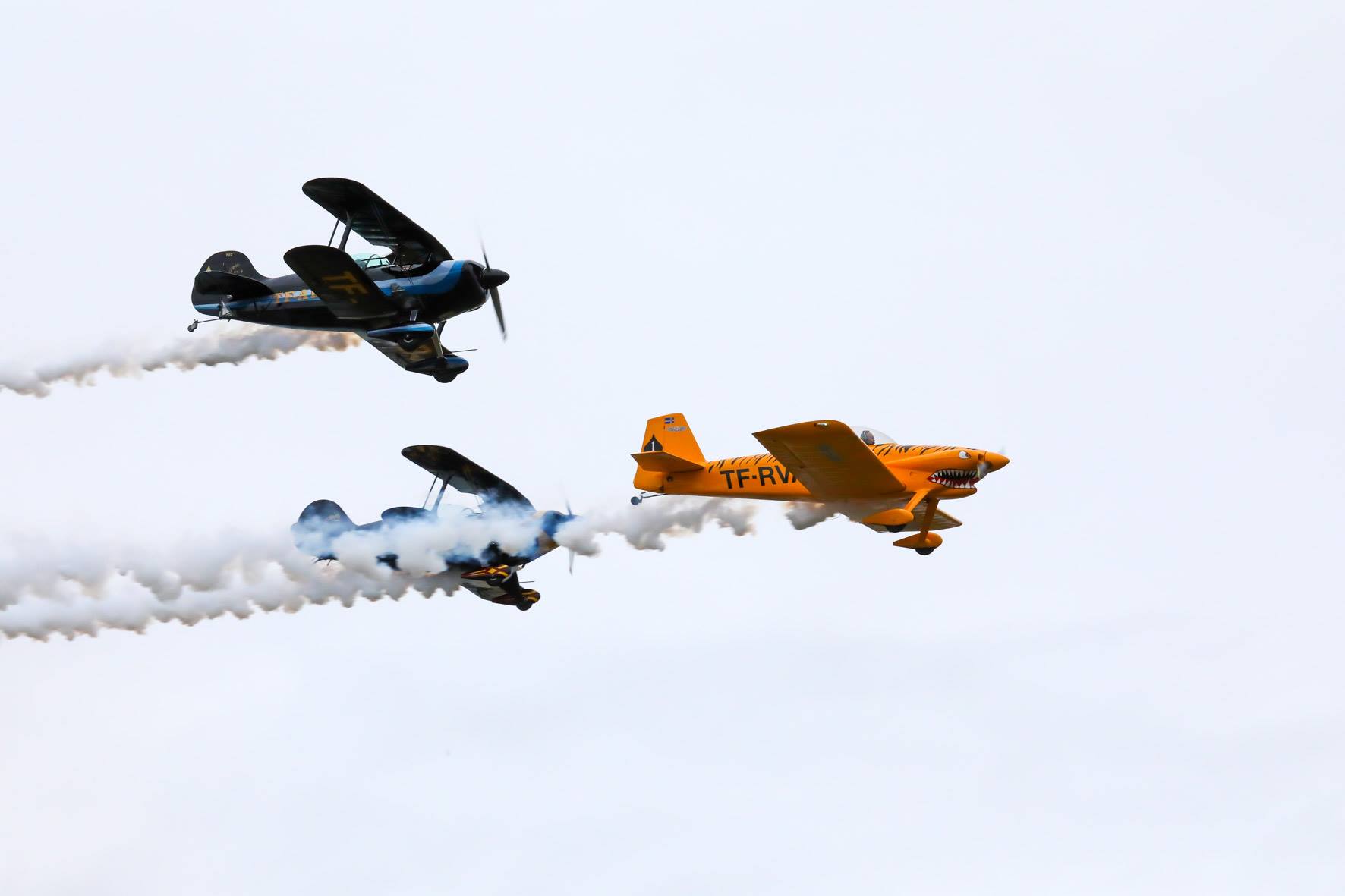 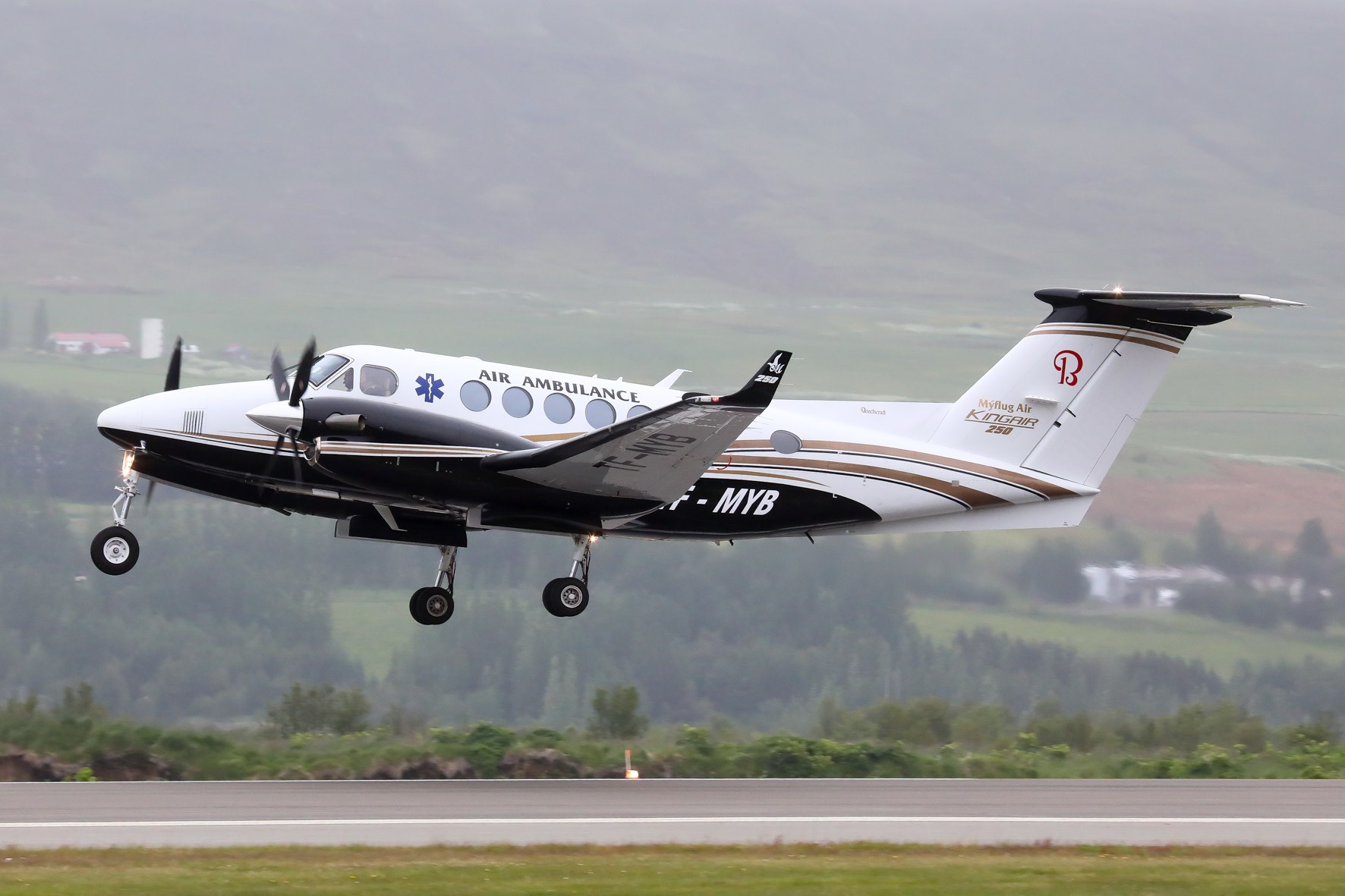 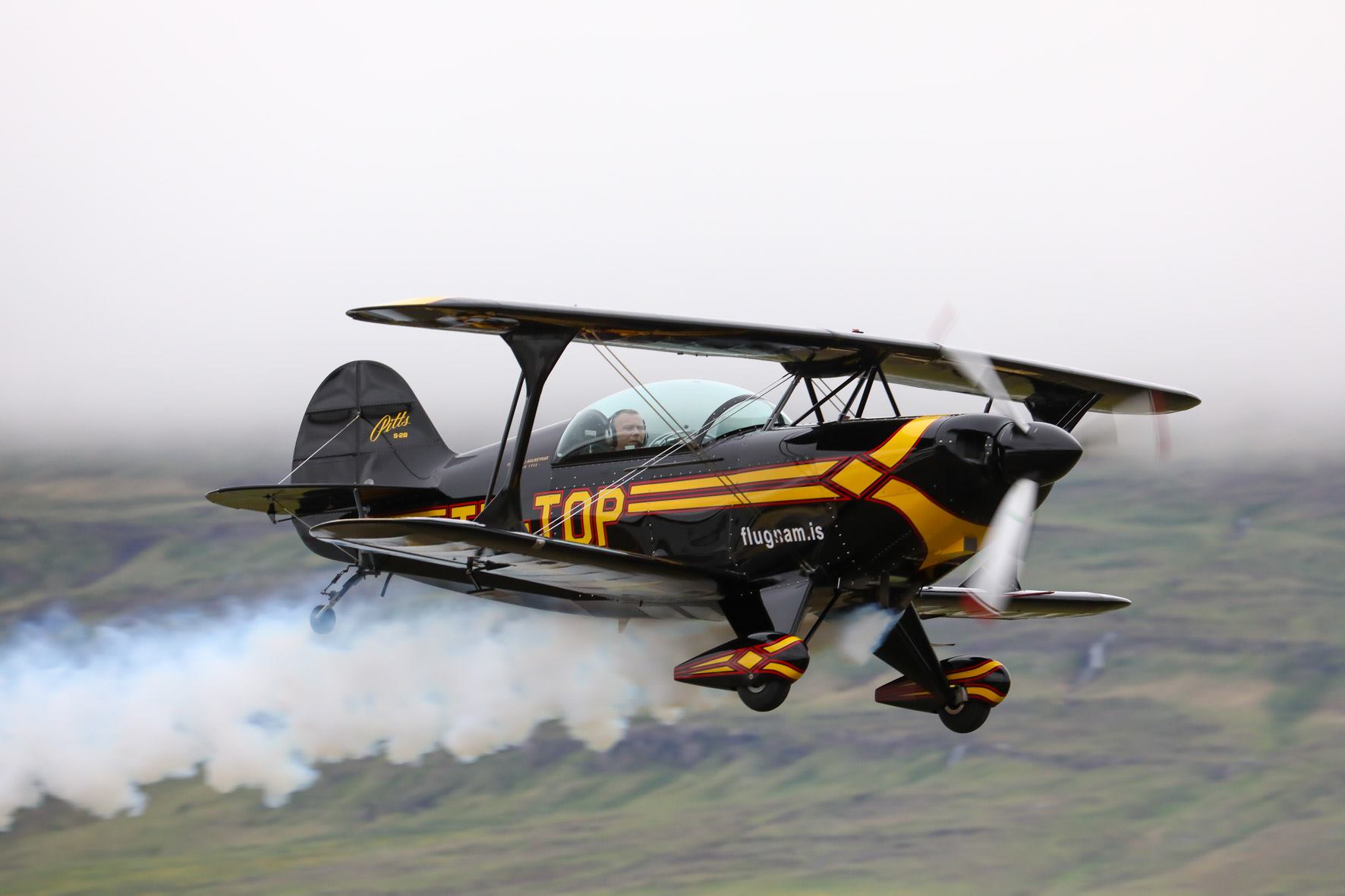 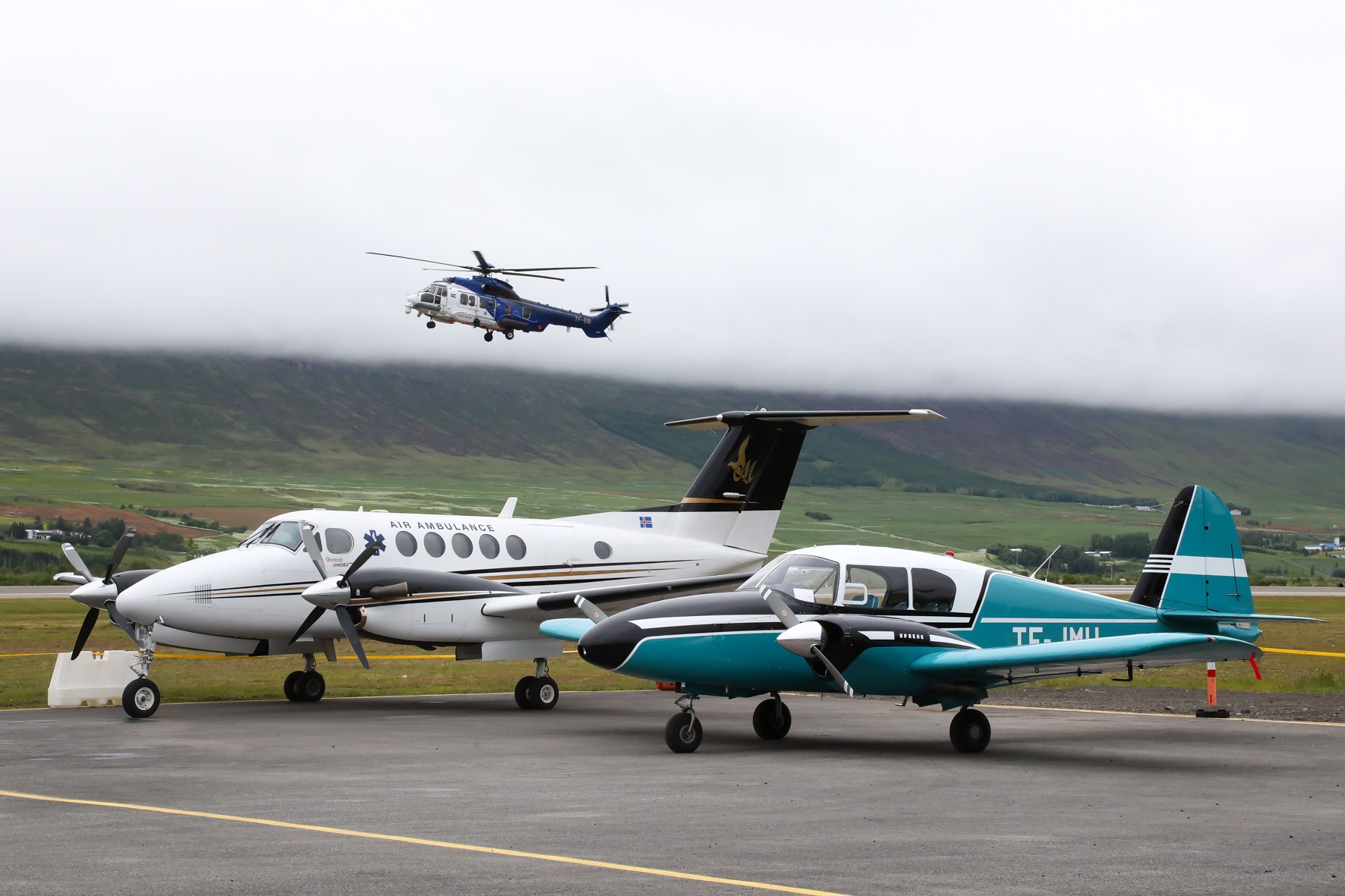 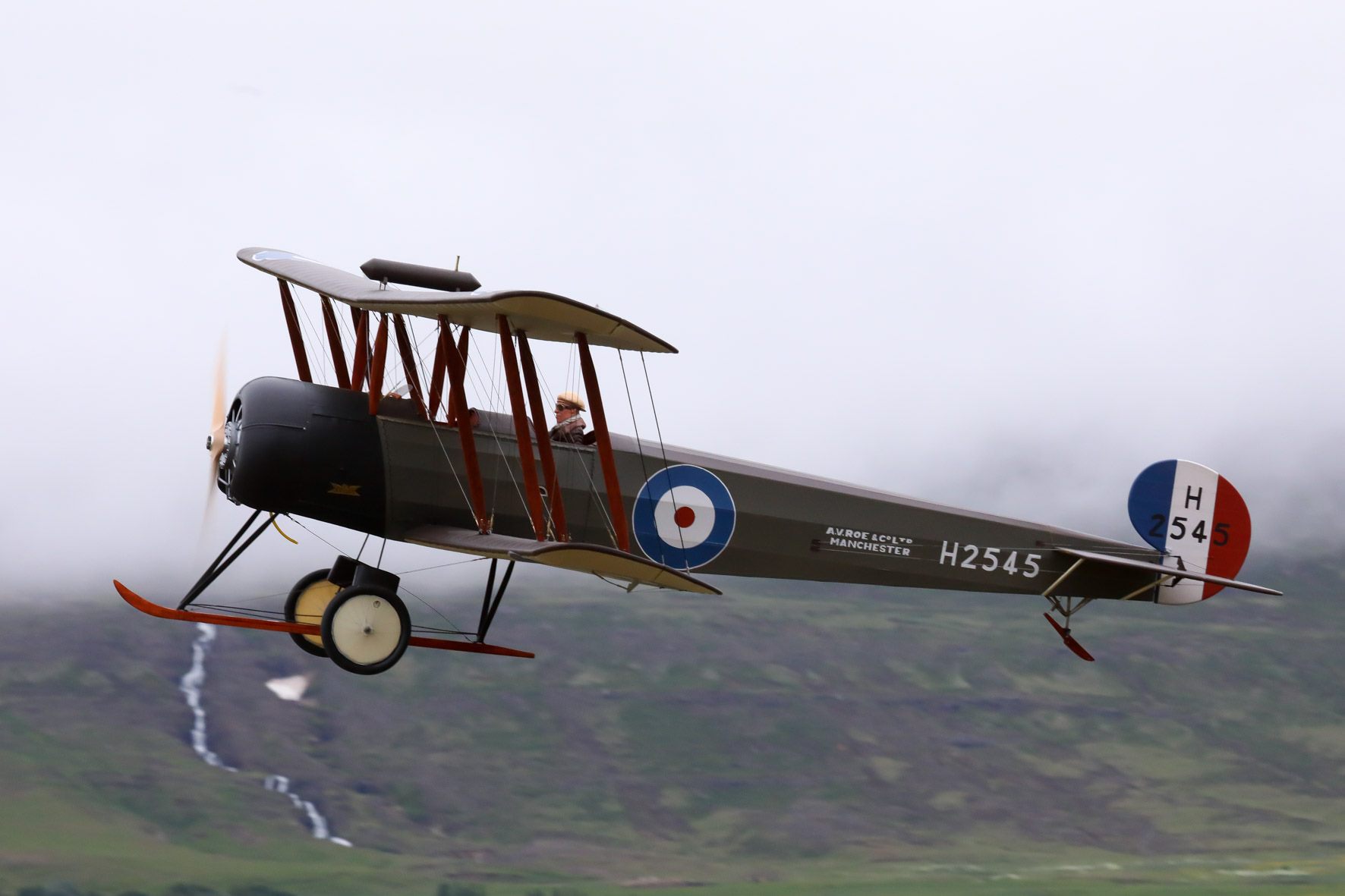 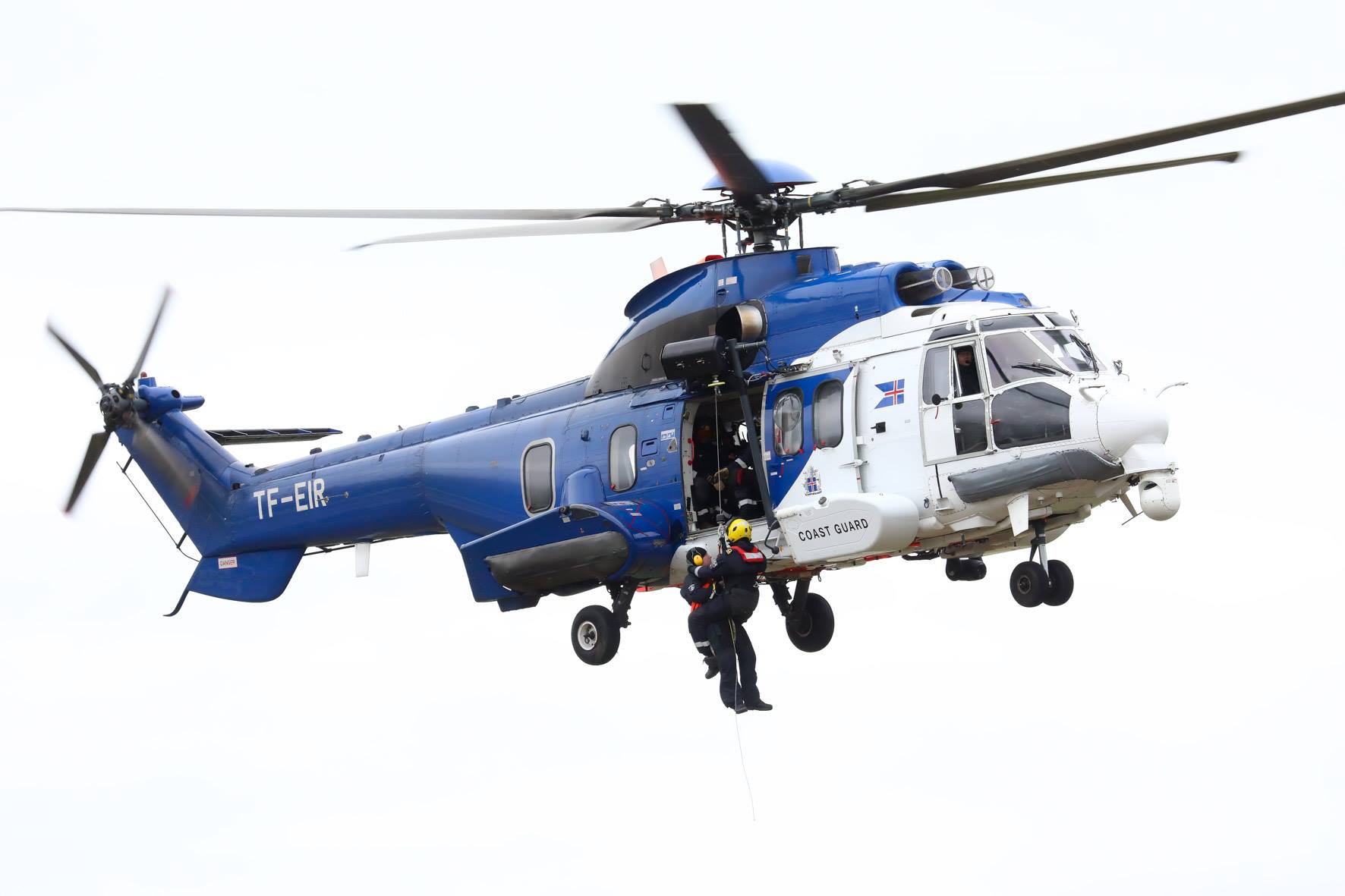 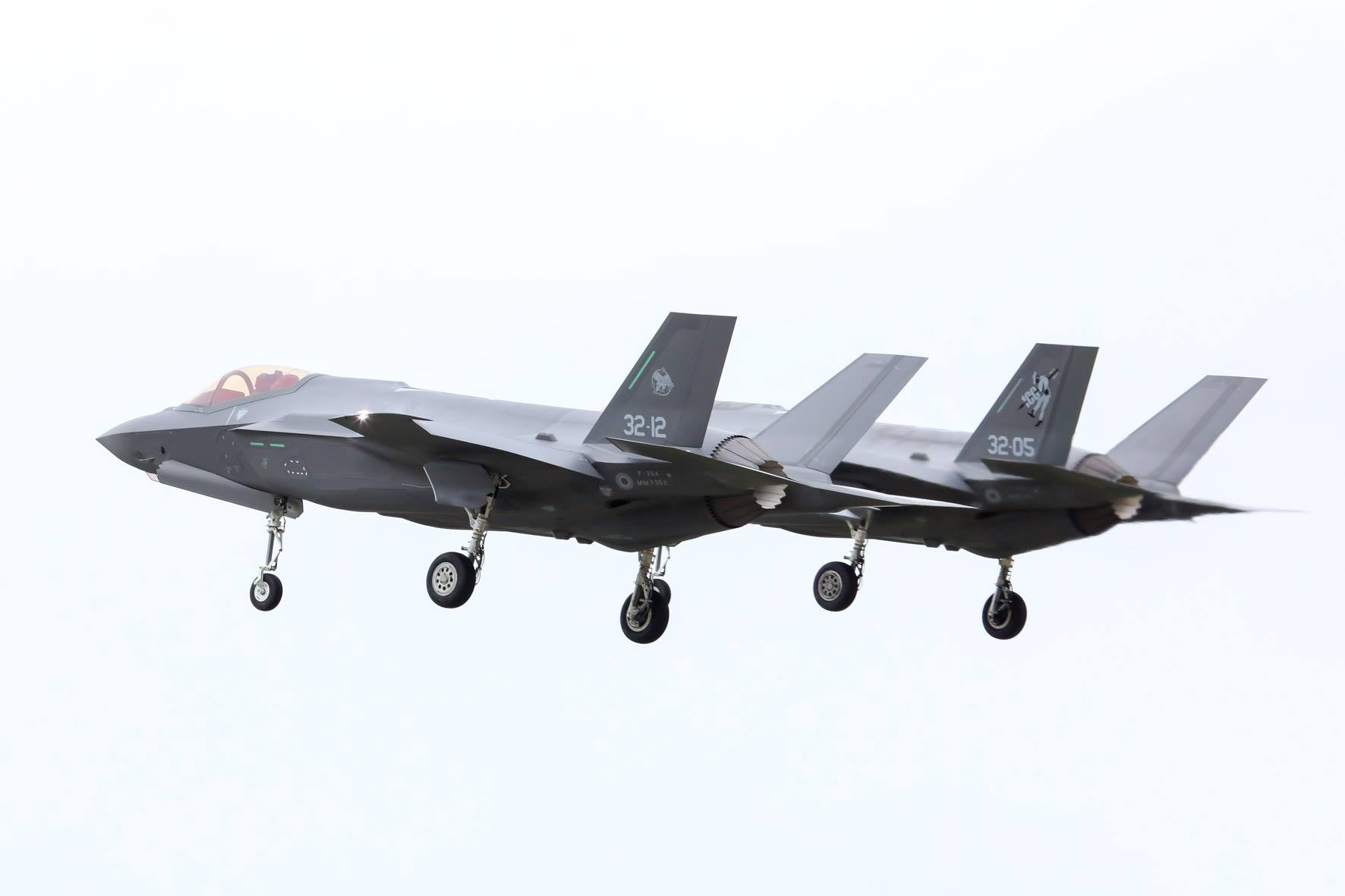 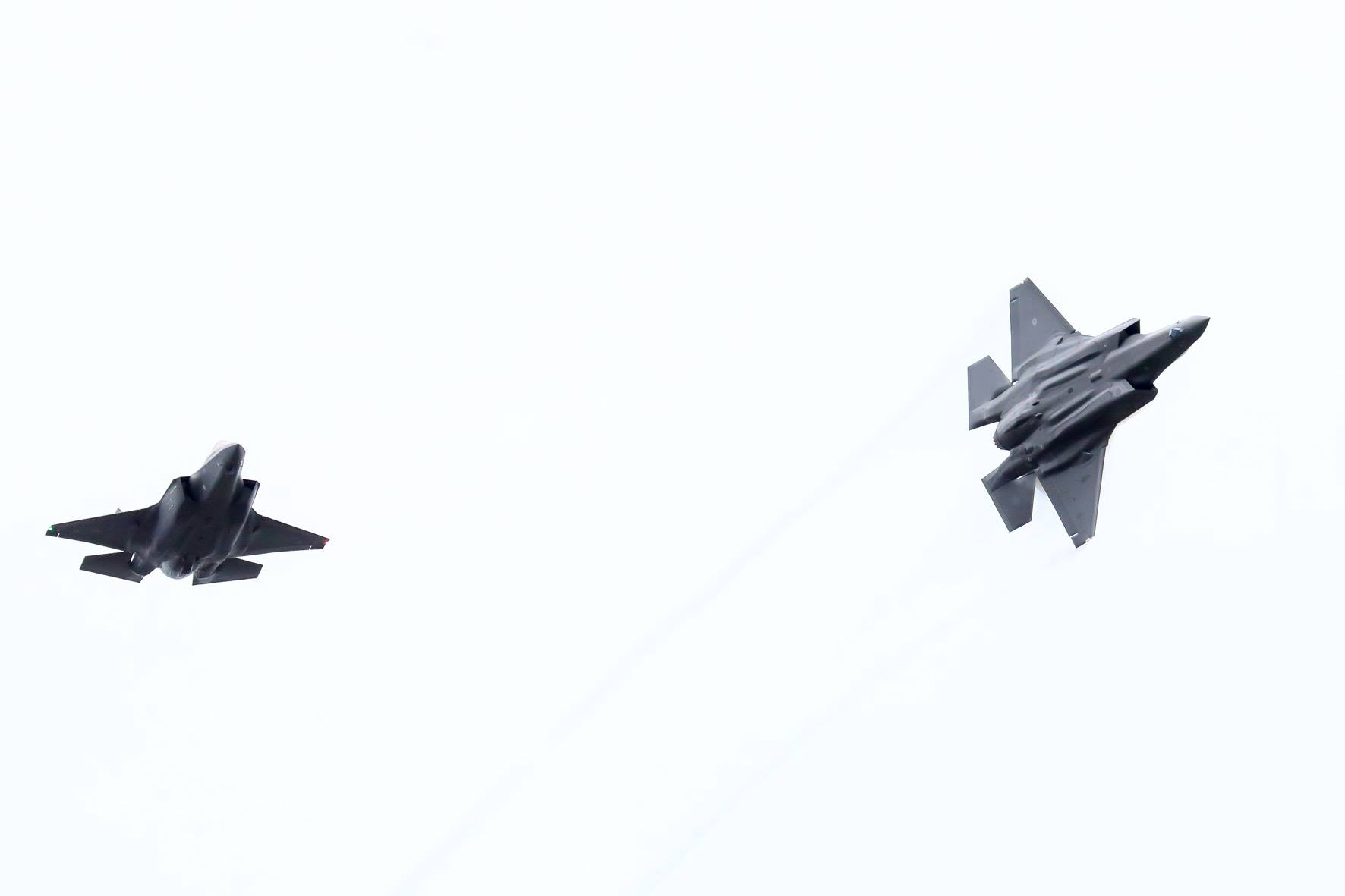 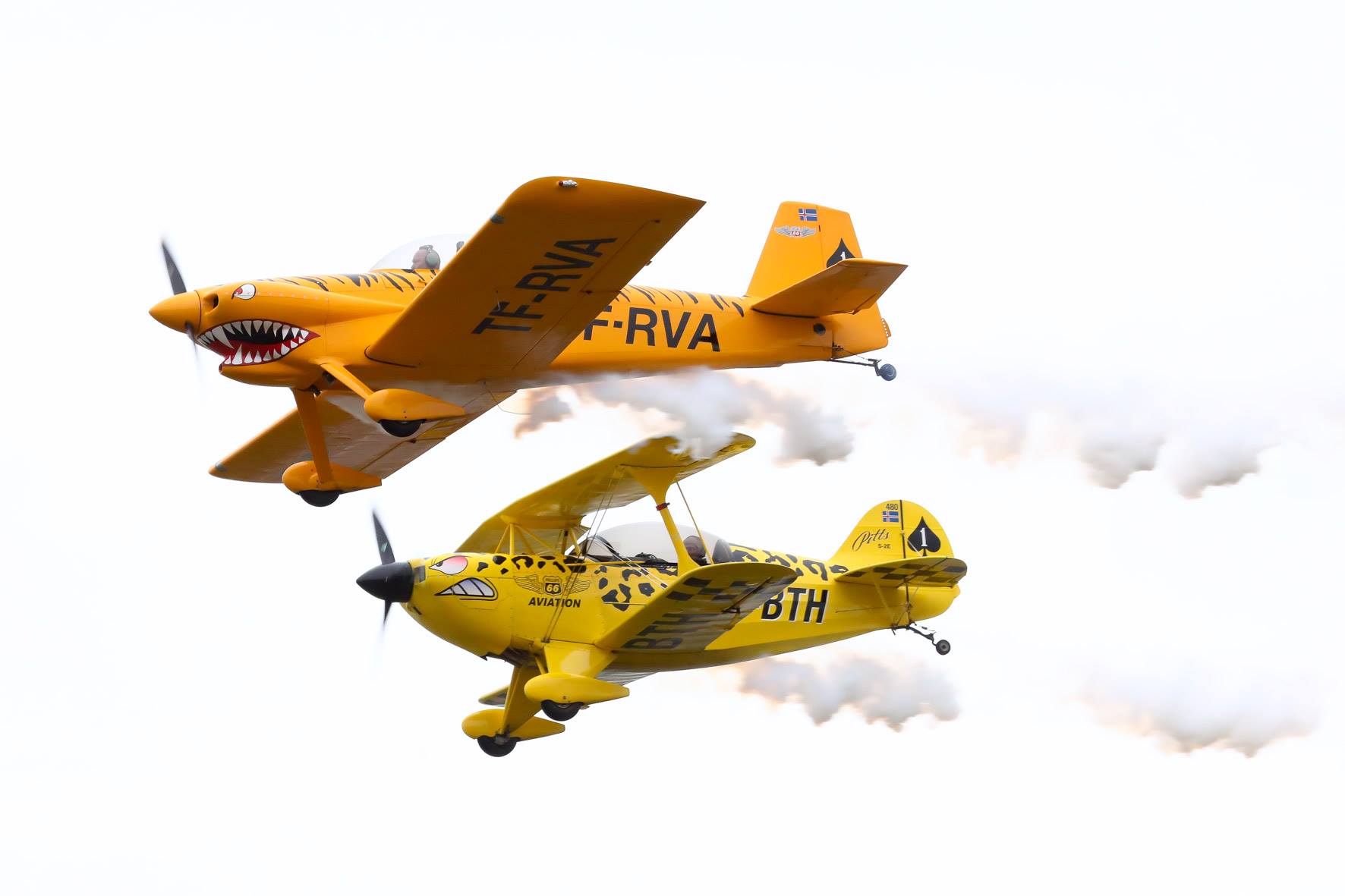 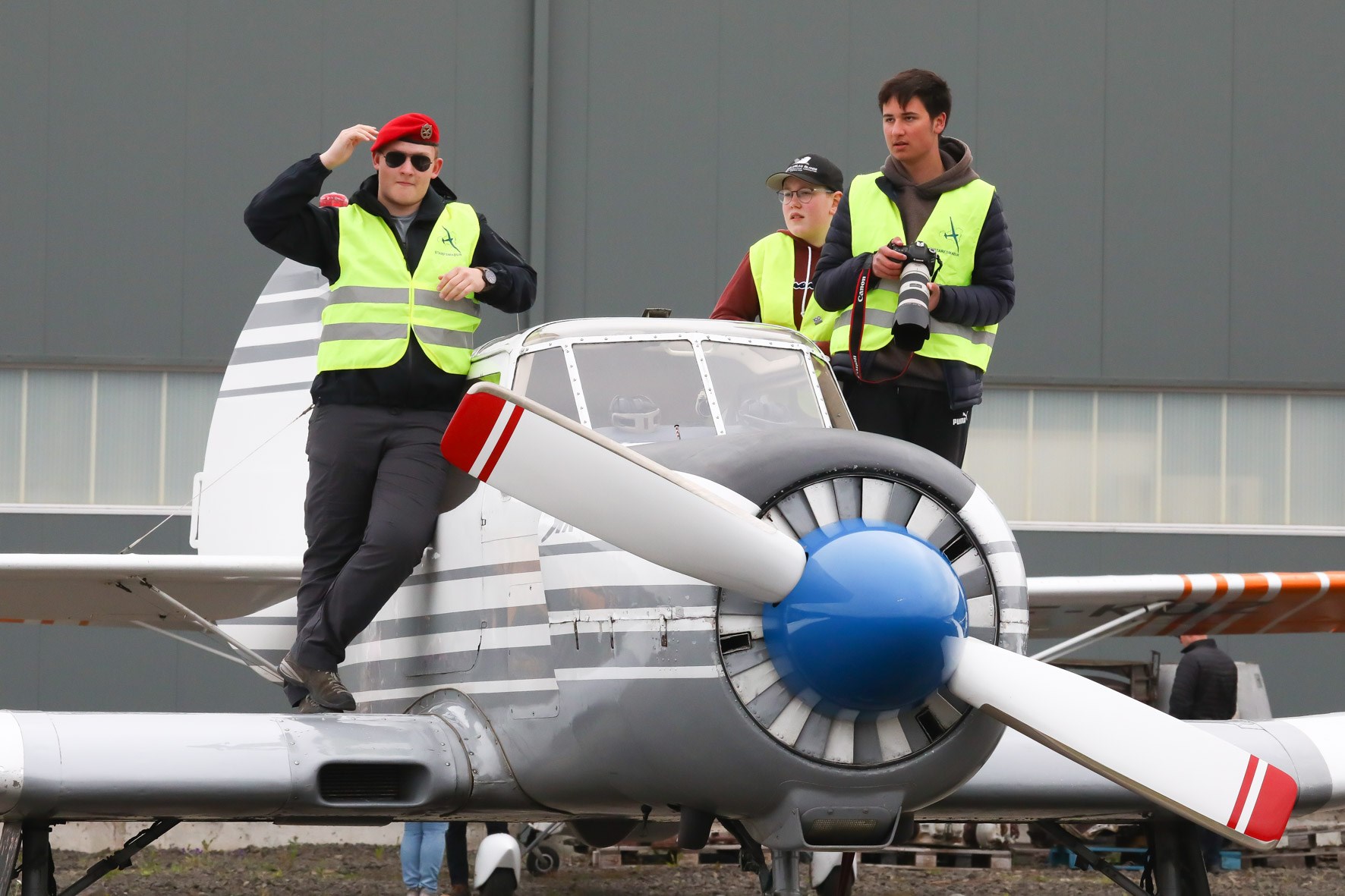 It is hard to say what was the most awaited among them, however, organizers told Flugblogg that the biggest amount of spectators they counted just before F-35 has arrived. The air show went under post-COVID restrictions, means there was a ban of gathering more than 500 people together. Every adult was counted at the entrance. So, minutes before “hello from the future” fighters were spotter above the Akureyri, there were 480 counted at the entrance, which was pretty much close to the limit.

People were waiting, the ground traffic on the taxiways stopped, but the F-35 or how they were called among staff “the Italians” were late. At that time, I was inside ATC Tower, listening “Falcon 1-1” and “Falcon 1-2” communications with the controller. Björg Unnur Sigurðardóttir was coordinating air movements in Akureyri during this period, so she told me the reason why the arrival of “the Italians” had been delayed.

“At first, they flew from Keflavik to the north of the country and to the north of the coastline. They were trying to find a spot where they can go below the clouds in VMC (Visual Meteorological Conditions). Eventually, they managed to do that somewhere around 30 miles from the field. Then they continued to fly VMC and they requested to climb to the north after the lowpass. I offered them an IFR (Instrument Flight Rules) approach because of the clouds, but they did not want to do that. I did not hear them well enough, because the transmission was corrupted by clouds and mountains, they were flying low”, said Björg Unnur Sigurðardóttir.

“This is the most fun day of the year”, Björg Unnur Sigurðardóttir told Flugblogg, “Unfortunately, the weather is not good enough. Because to work on this day with usual traffic incoming, how it was before, is the most thrilling day of the year. Of course, it is different from our normal days. We are used to having IFR traffic, scheduled traffic, ambulance flights and VFR local flights. Sometimes, when the weather is very good, we have a lot of traffic, even enormous: up to 50-60 movements per hour. So, today is actually a very quiet day for us, it is nothing compared to last year. The reason is just weather, for example, last Thursday it was sunny and really busy here”.

The air show in Akureyri is the first post-COVID air show not only in Iceland but in the world, which allows saying it is the biggest one so far. Meanwhile, there are about two weeks until the next annual air show – “Everything that flies” in Hella. Flugblogg met Matthías Sveinbjörnsson, the president of Association of Icelandic aeroclubs, who organizes all major air shows in Iceland, including this one in Hella. He shared his concerns about difficulties of organizing such events under post-COVID restrictions: “Usually we have a camp place in Hella, where people come for the whole weekend. Then there are many guests who will arrive at the air show itself. We will do necessary steps due to coronavirus, however, it will be difficult”. Ironically, just after the air show in Hella, the gathering limit will be changed from 500 to 2000 people. Because of the COVID the annual air show in Reykjavik, which is usually at the beginning of June, had been cancelled. However, Matthías told Flugblogg he is thinking about possibilities to organize it this summer. It seems like aviation life in Iceland slowly comes back to normal.

Static exposition at the air show in Akureyri // Source: Flugblogg

“Aviation will recover after COVID, I think”, Björg Unnur Sigurðardóttir told Flugblogg, “People have so many expectations and hopes are high, they want to travel. And here in Akureyri, we have nature and safe distancing between people, it is not so overcrowded like in big cities. For those who have money, they can fly on private jets, and we are going to have that. Then next winter it all should go back to normal or reduced normal, but gradually it will come back to the previous level”. 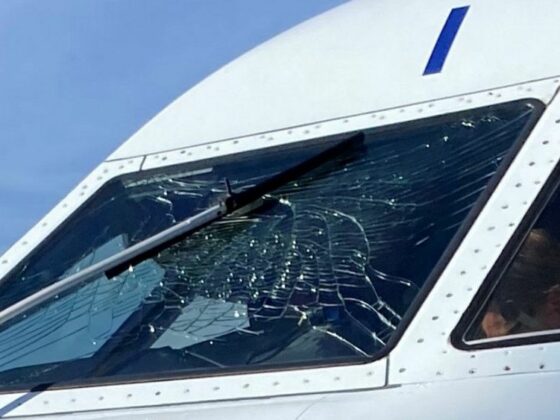