Most of the Group’s revenue decline between years can be attributed to the operation of Keflavík Airport and the Duty-Free Store because the number of passengers passing through Keflavík Airport decreased by 81% from 2019.

CEO of Isavia Sveinbjörn Indriðason said: “The year 2020 was extremely demanding for the operation of airports and air navigation throughout the world. The pandemic caused by COVID-19 actually took control of all our daily activities, leaving Isavia less than a part of it. Last year, a lot of energy went into securing our financing and access to liquidity as well as safeguarding the company’s strong infrastructure.”

He added: “Today we have turned defense into attack. We have been successful in securing access to liquidity, and despite having to make difficult decisions last year on staff reductions, we were nevertheless able to safeguard most of our jobs. The Minister of Finance, on behalf of our owner, decided at the beginning of this year to increase the share capital in the company, which enabled us to start the development plans of Keflavík Airport again. That decision was very important, both for the airport’s competitiveness in the future and our ability to get out of COVID-19, given the different scenarios and not least for the difficult employment situation in the local municipalities of Keflavík Airport.”

The effects of COVID-19 on cross-border travel are not yet over. “The latest government measures due to increased COVID-19 infections in this country show that we have not ruled out the threat of the virus,” says Sveinbjörn. “Nevertheless, it is crucial not to lose sight of the goal of opening up Iceland when the opportunity arises. Vaccinations in two of our most important markets, the United Kingdom and the United States, are going well and the Icelandic government has announced very important steps towards the opening of Iceland. Of course, we need to take into account the status of the epidemic each time, but we feel great interest from the airlines we serve in the steps that have been discussed due to traffic to Iceland and will of course do everything in our power to ensure that the recovery will be the most successful.” 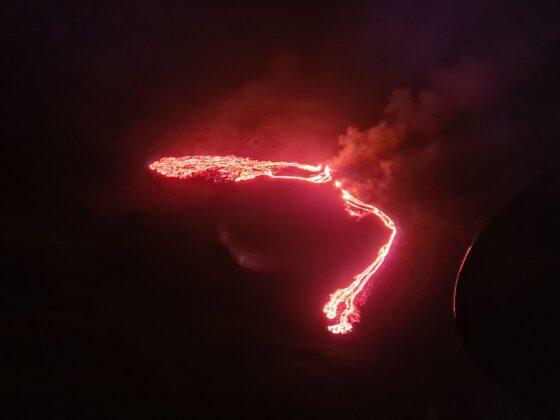 The eruption of the volcano Fagradalsfjall, less than 20 km from Keflavik, has started in Iceland. Isavia plane holding above