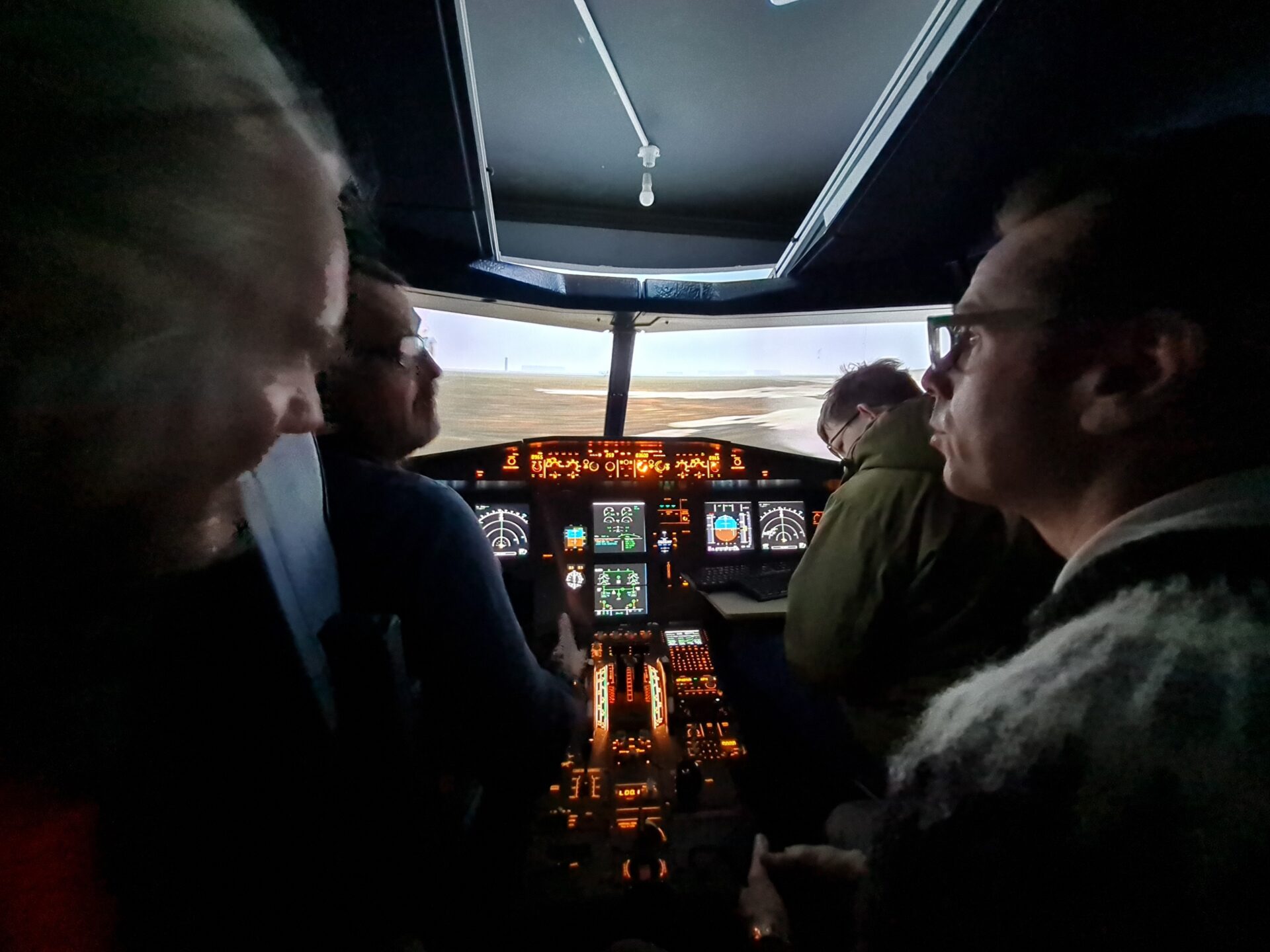 A 61-years old Árni Stefán Árnason, formerly graduated with a commercial pilot license, invested more than ISK 10 million into the full-size cockpit of an Airbus A320-200 flight simulator. Based on the south of the Reykjavik agglomeration area, Árnason pursues his dream to become an airline pilot and considers the simulator as a future business for Icelandic and European aviation enthusiasts with possible expansion to the market of ATPL pilots training.

A three-storey house with bright walls in Hafnafjörður, the southern part of the Reykajvík Great Area, does not give you a hint, that inside it there is a 1:1 scale model of Airbus A320 airliner. Well, not the whole plane, but only the cockpit, which is set on the ground floor. There are the seats from the real plane and all panels, including pedestal and overhead. In front of the cockpit is a curvy wall, which receives the image from three projectors, creating a window to virtual reality. All controls are at their places and a skilled enough person can perform the real-life procedure to take in the air the very sophisticated model of one of the most popular airliners from any airport in the virtual world.

The owner of the “airliner” is Árni Stefán Árnason, who started his flight career in Iceland about 40 years ago. Being 23-years old he graduated as a commercial pilot and flight instructor in 1983. After this followed 10 years of attempts to get the job as a pilot in Iceland, which ended without a success. While Árnason continued to fly on GA planes, he was introduced to the first flight simulators on PC. “A friend of mine, who is also a pilot, came to me with this software and installed it on my computer”, Árni Stefán Árnason told Flugblogg, “It was the first flight simulator I flew and since then I’ve been flying simulators.”

He decided to put a pilot career on a side and to build a new one as a lawyer, however, his interest in aviation has never faded away. It was 2014 when Árni Stefán Árnason realised that flight simulators progressed enough to emulate real-life airliners and there are options to get one of them for home use. “Trying to get more information, in 2016 I went to Flight Simulation show in Cosford, UK, where I met Marcin Kapera, the owner of the Skalarki Electronics. I had a very convincing conversation with him “, Árni Stefán Árnason told Flugblogg. Another trip to the UK, this time to the company’s headquarters in Birmingham, was needed to finalise the decision. “I took a test flight in the same simulator I have now, however, without the 3 projections, only with a small screen in front. I was very impressed and several months later I started to organize things on paper. I made a complete purchase from him a few weeks after that”, said Árnason.

The next step was to get the frame, on which all the modules should be set on. According to Árnason, the only option was to get the whole set from Germany, which was expensive. “From that point, I waited until the parts from Skalarki will come to Iceland and I was a bit overwhelmed [when it happened], as you can imagine,” Árni Stefán Árnason told Flugblogg, “In 2017 I finally started to assemble the simulator and the process is still going on.”

There are two PCs running the simulator, which were upgraded in 2020. The main computer uses an Intel i9 CPU with NVidia GeForce RTX 3060 GPU, while the second computer is equipped with an Intel i7 CPU and NVidia GeForce 1650. “We use M2 hard disk to run both sims. On the main computer, I also have a hard drive, where I store all the ORBX scenery, I have them all.” He estimates all investments as ISK 10 million (USD 76 900, EUR 68 000, rates by CB of Iceland on 26.12.21), including the modules, frame, PCs hardware and software for the simulator.

Árnason emphasized that these costs do not consider hours of human labour to make the whole simulator work. “Four voluntaries contributed their time in this project so far. First, it was me, then it was the president of Icelandic association of flight simulators [Icelandic Flughermafélag Íslands] Böðvar Eggertsson, and later an airline flight dispatcher Gunnar Ingi Briem and sound director Sigfús Jónsson have joined. All are with an extensive experience in flight simulators”, said Árnason. During the first years, the assembling of the simulator went slow, however, the progress speeded up a couple of months ago after Gunnar and Sigfús joined the team. Now Árni Stefán Árnason estimates the readiness of the simulator as 90%, saying the only part left is a fine-tuning of controls and the image from projectors.

The simulator might be fully ready in 2022, then Árnason will be able to offer payware sessions on it for aviation enthusiasts both in Iceland and beyond. “The part of the income will go to the Flughermafélag Íslands, ” he said, “My target is to have European simmers to come here in the 1st quarter of the next year. For example, there is a virtual airline in the UK, and the president of this virtual airline already had contacted me. They want to come with a group and stay for 10 days here.”

“I can run this simulator as a part of the Airbnb business for European pilots to come here and stay, here is the full facility for this. And for regular pilots, who maybe don’t have an A320 type rating anymore or still have a license, but want to do some training, it can be an option as well, because it would be much cheaper for them. I had inquires from former WOW air [collapsed in 2019] pilots to come and train here before going to a full-motion flight simulator abroad”, Árnason told.

This upgrade will pave the way to the bigger market of pilots training for the whole A320 family. Surprisingly it is possible to find future clients even in tiny Iceland. There are seven flight schools in the country, however, only two of them offer ATPL licence training. Then there is a took off in 2021 Icelandic low-cost airline Play, which fleet consists of Airbus A321neo and A320neo. “I will introduce the simulator to flight schools and to Play once we will finish the complete fine-tuning of the simulator. Several Play pilots already know about this simulator. Play’s Line Training Captain Robert Ödlund visited it about one year ago, but we did not discuss anything in this regard yet,” Árni Stefán Árnason told Flugblogg. If success will follow, then the training facility can even be expanded with another simulator. Árnason said he had already done preliminary research about a purchase of a Boeing 737 NG cockpit from Spain. The cost of it is between ISK 6 and 7 million (between USD 46 200 and 53 800, EUR 40 800 and 47 600, rates by CB of Iceland on 26.12.21).

Despite the possible business opportunities, the commercial use of the simulator is not the important part, according to Árnason. “I even did not consider the idea to make it a business when I started this. For me this simulator is such a dream becoming true, that I still don’t believe in it. I can go into the cockpit and fly with others, and enjoy the flight in the simulator nearly that good as the most sophisticated one as Icelandair has. I would be 100% happy even if I will have not any business on it. The original idea was just to be able to fly and enjoy”, he said.